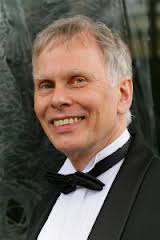 Paul Leddington Wright started conducting at the of 15 when he was appointed conductor of the Maidenhead combined schools’ orchestra and also organist and choirmaster of his local church. These 2 positions he held for 4 years before going to Cambridge where he won an organ scholarship and continued his conducting alongside his studies.

Following university, he started a career in Musical Theatre, having had much experience as a musical director in amateur productions as well as at Cambridge where he directed the University Gilbert and Sullivan Society. Work in the West End and provincial theatre lasted until he moved to Coventry to take up the position of sub-organist at the Cathedral.

After a short period back in London, he returned to Coventry in 1984 as Director of Music, a post he held for 11 years. He then went part-time in order to concentrate on his expanding work abroad and with the BBC. He has been conductor of the Saint Michael’s Singers since 1984 and next year will steer the choir through their 50th anniversary season which will include a concert in November with the Warwickshire Symphony Orchestra, to include Elgar’s Music Makers and the Saint-Saëns Organ Symphony.

As principal conductor for BBC TV’s Songs of Praise series, he has conducted over 300 programmes, including the 40th and 50th anniversary specials and all 10 Big Sings from London’s Royal Albert Hall. Over the years he has not only worked with top London session orchestras, but also the Royal Philharmonic Orchestra, BBC Concert, Hallé, BBC Philharmonia, Northern Sinfonia, English Chamber Orchestra and Southbank Sinfonia. He is also currently Associate Conductor with the English Symphony Orchestra.
He has just come back from conducting in the USA, and returns to those shores next year to undertake more work with orchestras, choirs and as a recitalist.

We use cookies to ensure that we give you the best experience on our website. If you continue to use this site we will assume that you are happy with it.Ok